Skip to the content
Time is flying by! We ran out the door at 7:30 this morning to get the kids to SCUBA class. They love scuba diving in Puerto Rico, the waters warm, and they have found some pretty cool things below the surface! It was pretty easy to get them up and out this morning. We saw Charlie as we were leaving and he said he has our next cabin ready for us. It was a little strange as he was holding that huge machete. He told us It’s high in the jungle but much cooler than our current cabin. Hehehe!!!
We rented our first cabin until the 27th thinking we would be able to find a house before the first. The owners had already had this place rented. So now we are moving to a cabin higher up the hill. No big deal. But the grin on his face sure was!!!
This day was crazy hot.
Elijah (Berkies Boyfriend) also started scuba class with the kids. He was able to catch up to them with very little effort and they all did their first dive together. The first dive was at a beach called Crash Boat. They had a blast.  They will all be certified divers next week. How cool is that?
Oh, we decided to take the dog with us, Big mistake! He got sick from both ends! In the new truck! Imagine what that smells like in 95 degree heat.
GROSS! 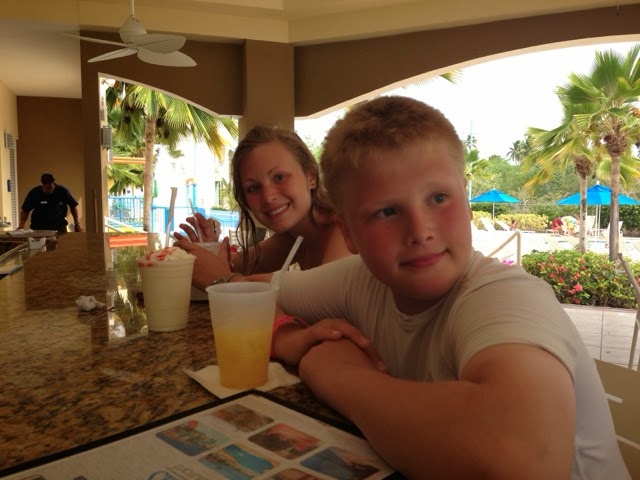 I had another lesson in patience today. I needed to print some stuff for the moving company. So I went to Walmart in Isabela, and bought a small cheap printer. Of course I forgot paper and the cable to connect the computer to printer. So when we got back to the cabin I had to run back out, but this time I went to Kmart in Mayaguez. Guess what they lock up behind glass. Yep, the printer cable! Guess who has the key for the glass case? Yep, that’s right! Only one person in the entire store!  My quick trip to Kmart took over an hour.
Thank god for my boy, Liam. He calmed me down.