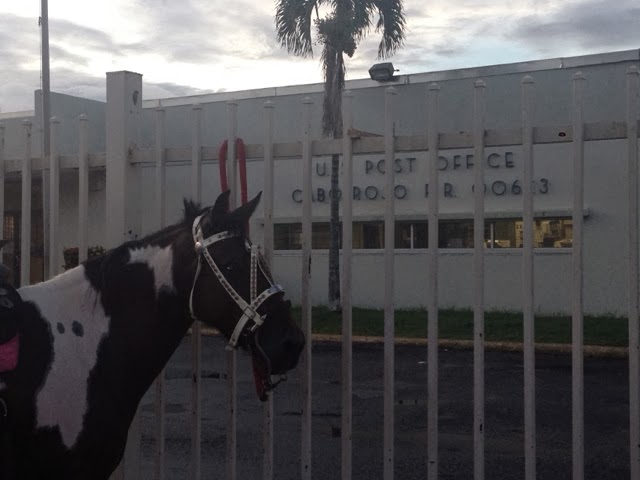 Well, it’s been a while since I have written anything about our new life in Puerto Rico. I started working and that has been an exhausting challenge. Everything is so different here. My co-workers are great. My work environment not so good. The building is in terrible shape. I won’t go into to many details about that but I will say that I hope to improve that.

We had our first real power outage. It lasted an entire day. Scary, huh? The security cameras stopped working too. OMG! No guns! No Cameras! What are we to do?

We did have Mr. Gadgets (Liam’s) Go Bag. A Machete, MRE’s and matches what else do we need, right? He saved the day.

When the power did come back on it was not enough to turn on a TV. Just a light! And that light was as bright as a lighting bug! The best part about the power outage was the lack of water. The water stopped working and didn’t come back on for several days. Liam and I showered in the pool. The girls at school or the gym.

I keep trying to be positive. That is my role as a dad, right? But life here is so different from Alaska.

I will admit I am very proud of my family for holding it together so well. We had our first 105 degree day. No one enjoyed that including the truck. It looks like the engine and transmission are burned up. It overheated and died last Thursday. It got so hot the transmission melted too.

So we are on a quest to find another Puerto Rican beauty this weekend. Liam says he wants a car that can hop up and down. Madison wants a Bentley or Maserati!

Jenn wants a old Land Rover and all I want something that runs! And not a horse. Yes, I know horses are everywhere!!!

I wonder who will win this battle?

We also have a new addition to our Puerto Rican house. And its not the big lizard who greets us every morning in the shower. That’s Pedro he is already part of the family.

Jenn and the kids were at Kmart getting more STUFF that we really did not need and saw a super ugly little girl dog. The store manager picked her up on his way to work. I guess she was running around on the highway. She was covered with flees and completely malnourished.  She is so ugly that it’s hard not to smile when you look at her. They grabbed her and took her to the local Vet. She was in pretty bad shape. They spent a small fortune and saved one small dogs life.

So now we have a Puerto Rican stray dog protecting our hearts.

I’m taking today off from work.

Surfs up in Isabella. Cya