I had so many plans to have a great weekend with the family. I had everything planned out. I should know by now that plans always change in Puerto Rico. Liam was sick with an ear ache so that prevented the kids from their scheduled surfing and golfing lesson in Isabella. Madison wanted to sleep in anyway. She said she was working on her beauty sleep and its hard work! So Jenn and I left early Saturday morning and drove to Rincon.

We packed up Maya our little Puerto Rican Princess or Sato Perro. It was our plan to teach her to sit on the paddle board so she could go with us on our adventures. On the way to Rincon she threw up all over the back seat of the truck. I forgot to mention she gets motion sickness. Maybe this isn’t such a good plan? We cleaned it up the best we could and continued on to our favorite Beach, Tres Palmas. The waves were huge and the wind was blowing over 25 mph. It would not have been fun for us to paddle board today. So we decided to go back home and pack up the kids for a road trip. I guess we needed or wanted the kids after all. The plans changed again.

In Utuado we were rear ended by an old Nissan Pathfinder with a cattle guard on the front. It mangled the rear bumper of our car. Isaac the driver blacked out and crashed into us. No one was hurt. It was just a little jarring. He said something about low blood sugar. We called the police to report the accident and several hours later he showed up. I’m glad we had some local entertainment to watch while we waited.

Across the street a new church was singing songs and passing out prayer cards. We met some incredible people from all over Puerto Rico including Isaac who crashed into us. We had our first experience with the Puerto Rican Police. We were actually surprised. The Police Officer was very courteous. We exchanged insurance information and off we went. 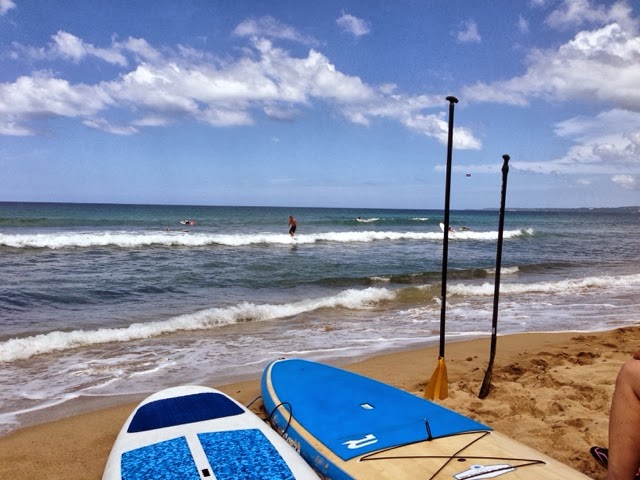 We decided to go to Lago Dos Bocas. It is a beautiful lake in the middle of Puerto Rico. The lake has a ferry system that takes you to the many different restaurants around the lake. Of course only one restaurant is open on Saturday night. We had a wonderful meal with horrible service. I wish this would change. We found out that the ferry driver was the actual restaurant owner. Maybe someone else should drive the boat and he should stay at the restaurant? It probably wouldn’t matter! We made it home around 10:30.

Sunday morning, we went for a walk and bumped into a fellow paddle boarder. He said conditions were perfect and we should go to Rincon. We loaded up the kids this time and headed to Rincon for a fun day in the sun. No dogs this time.  We had a great day. The kids love the water and handle the paddle boards like pros.

Have you ever seen someone walk through a spider web? They make some crazy body movements including swinging their arms all over as they try to remove the spider web. Imagine no spider web and still seeing those crazy movements.

Yep, that is Jenn trying to keep her balance on a paddle board.

We had a great weekend. Even though our plans changed we still found time to be a family and met new people.