Well another weekend in paradise has passed. At least this is what we keep telling ourselves. The normal frustrations still occur but I think we are finally letting the craziness go by the wayside. Life in the Caribbean is truly incredible. We try every weekend to fill every moment with something fun and interesting for the kids. This weekend included a trip to Ponce, La Guancha, and La Parguara. We saw Japanese gardens, the Don Q mansion, a haunted house filled with scary creatures. We even saw some unbelievably big fish and crazy Pelicans with attitude.  Yes, those pelicans had more attitude than my kids. We also squeezed in a day of windsurfing.

On Friday, Jenn and I looked at a penthouse condo on a mountain top in La Paraguara. It has a beautiful 180 degree view of the southern Caribbean Sea. This condo is on the sixth floor of a building built into the side of a mountain. The building is not free standing and was designed to be part of the mountain.  It’s a little small but for the right price we can down size to have that view. After living on the ocean in Alaska we were very spoiled by the view we had. Besides the housing market here is still in the toilet here. So the price should be extremely negotiable? We plan on going back to see it again this weekend to discuss the possibility of changing the floor plan. If it works out we may be living in a new home very soon.

On Saturday, we started our normal weekend adventure a little late. This time it wasn’t as easy to wake the kids and get them moving. Surprised? I was. I will agree it was a long tiring week. But we were able to leave the house by 10:00. We headed east on highway 2 to La Guancha. La Guancha is a seaside port where the fish swim up to the docks and shore line. These are not normal fish. They are the size of dolphins. They look like large carp and are called, Sabalos. They are a protected fish and are hand fed from the docks. The Pelicans are all over the place and are fighting for their share of the food. I think they are a little jealous and that might be why they have so much aggressiveness/attitude? The Pelicans can stare you down like an ex-con. It’s a bit intimidating. We left after being run off by a few angry pelicans.

By now my hostages (My Lovely Bride, Maddie and Liam) were also hungry. I know, right? They stared me down like a pelican. I was instructed by Maddie to find a PF Chang’s Chinese restaurant. I was surprised that Jenn also wanted the same restaurant. Usually we all end up in some lengthy debate.  After driving all over Ponce I found the restaurant and we had a wonderful meal. After lunch my hostages were eager for the next leg of our weekend adventure.

We drove up to the DON Q Rum Mansion. I know what you’re thinking driving, alcohol, kids, and a mansion. This has the makings of a realty show. Ok, I thought that too. But the mansion was donated to the City of Ponce many years ago. The city gives tours and holds events in the mansion. It looks like a castle you would see on the Spanish Riviera. It is used as a haunted house for three weeks before Halloween. We have been to several haunted houses, but we have never seen anything like this. The line to enter was over two hours long but I will admit it was worth it. It was by far one of the scariest haunted houses we have ever been too.  I knew the Screams or Boooo’s would be in Spanish. So I was convinced they would not be able to scare us because we don’t fully understand Spanish yet. But I was so wrong. The Spanish screams and Boooo’s were scarier. We had a wonderful day in Ponce and La Guancha except for the ex-con part. 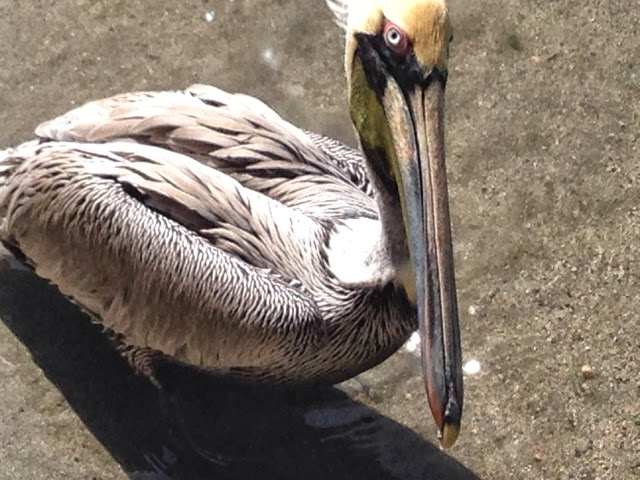 The next day we spent trying to use our yard sale find. We bought a windsurfer and a kayak for $75.00 each. Yes, I know that’s a pretty darn good deal. We drove to the closet beach and jumped right in. I was surprised Liam got right up and took off sailing. That boy has water skills. Then the wind changed and we couldn’t sail the board back. It wasn’t much fun walking along the beach all the way back to the car carrying a heavy windsurfer. But Liam carried it back like a champ. Someone had to supervise and provide encouragement, right? He stared at me like a pelican all the way back to the car.