We woke up very early. Madison had an appointment at the catholic high school at 8:00. We also had to relocate and be out of our current cabin by 9:00 am. It was a super busy morning plus it was well over 90 by 8:30. Even the grounds Keeper was passed out in the yard from heat exhaustion or it had something to do with all the empty Medalias cans trailing the lawn mower. 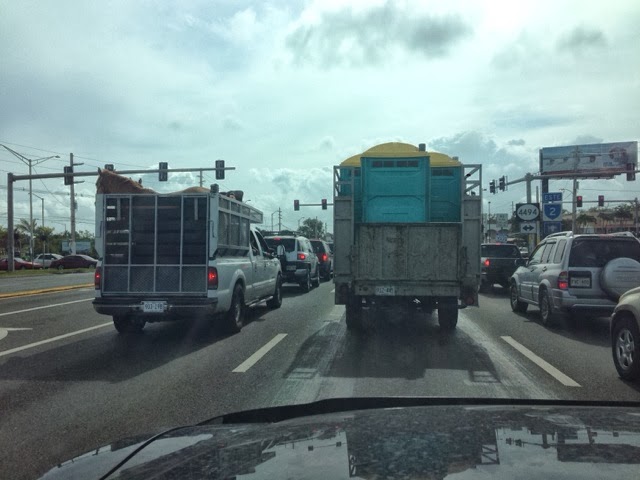 We saw so many hidden neighborhoods and parts of Mayaguez that we had not seen. Including a French chateau on top of a south facing mountain. It was beautiful.  It wasn’t for sale. The gated homes reminded us of houses in the Hollywood hills. It was a beautiful area with gorgeous views.

Later we found an interesting restaurant that serves authentic Puerto Rican food near the beach in a really rough neighborhood. The food was great the service was horrible.

At a nearby intersection we could see a huge fight in the middle of the street. We decided to leave and not walk around the neighborhood. We left the parking lot and turned left heading east. As I was driving I noticed a fews strange and empty roads signs but I really didn’t pay much attention or care. I just wanted to get out of this neighborhood. Plus I knew where I was going. I drove about a mile on this small highway. My youngest son Liam was yelling, “DAD, you’re going the wrong way!” I thought how does he know where we are going? He is only 13. He can’t even drive. He said it again and again. He was driving me crazy.

I keep thinking the same thing. He is only 13! How does he know where I’m going? And just then I noticed headlights coming towards us and the road signs were backwards.

I thought for a split second that I was on a Twilight Zone episode. It then occurred to me my son was right. I quickly turned right and got onto the correct side of the divided highway. I guess he was right. He did know where we were going. Maybe I should listen to Liam more? I’ll probably never hear the end of this..

It was another fantastic adventure filled day. And another lesson learned.