Our plan was to go to Costco in Ponce and get a few items and drive back. We decided to trust the iPhone map program. We just downloaded the updated software that should have fixed the bugs. We really should never trust the iPhone map or any GPS device in PR. After arriving in Ponce we discovered there was no Costco in that town. We then Google searched for the closest Cosco and found that it was in Caguas. We drove north for about an hour. The map program took us to a gymnasium in a really bad neighborhood on the east side of Caguas. We drove back and forth for over thirty minutes trying to find it.

This is when most lovely brides would say, “Stop the car and get directions!” Luckily we both don’t speak Spanish very well. Besides if someone did try to tell us which way to go we would have not been able to keep up with the street names. So that argument never happened. I actually like that part of Puerto Rico, the not asking for directions part. Another weird issue was the location dot on the map. It kept moving further away from us. This still makes no sense to us and was very frustrating…

We never found the Costco in Caguas. 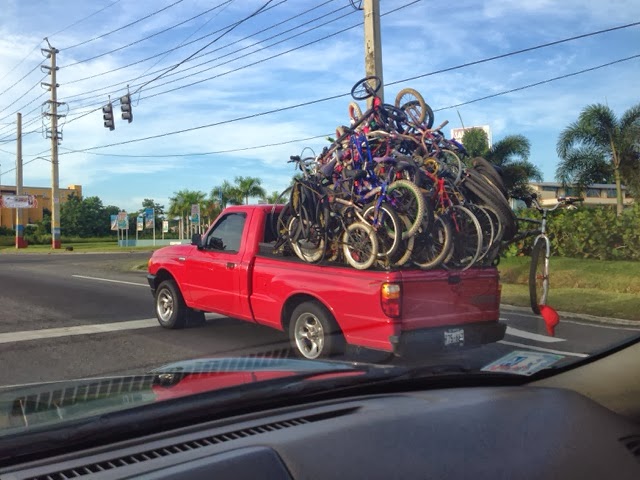 We decided to change our plans and check out the new IKEA in Bayamon. We were almost in San Juan anyway, so it should have been a short drive.

I’m sure you know where this is going… TRAFFIC, TRAFFIC, and more TRAFFIC in every direction. We were in the Friday Puerto Rican rush hour. So we pulled up our trusty iPhone map program and found the store. The weird thing about this new map program was the IKEA store kept moving around on the map. After an hour of bumper to bumper Friday afternoon traffic we pulled into the parking area of IKEA. We were surprised to find a parking spot in front. IKEA stores are normally an all-day shopping adventure. We thought we would eat at the world famous IKEA snack area and wander around in the air conditioning and dream of decorating our future home. We walked in and found this IKEA to be a catalog store. Here you order and pay for your items and return the next day to pick them up. This IKEA only had a few items for display and three cash registers. It was like a small retail store with nothing to actually buy. We were so disappointed. So far the entire day was an EPIC failure so we decided to head home.

While driving home we started to wonder where is the closest Costco was located. So we asked the trusted iPhone, SIRI. She said Costco was 19.8 miles in the opposite direction. The funny thing about this is, we were right in front of the store. We laughed and asked again. Because that’s what you do, right? She gave us directions for another store about 14 miles away. SIRI never found the store right in front of us. I think we are completely done with SIRI and GPS!

Maybe I will stop next time and ask for directions?