Letter from our new dog…….. 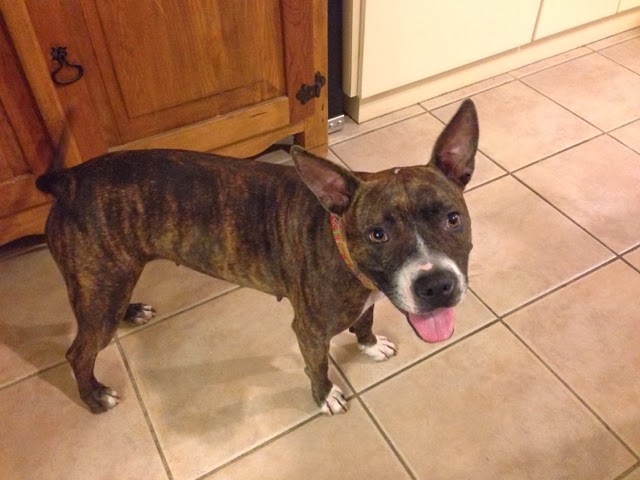 My name is Maya. I am a stray dog from streets of Mayaguez. I wish I could talk English. If I could I would say what a happy and lucky puppy I am. My new family only speaks English. But that’s OK they are trying to speak Spanish. This message will be in English so they can understand.

I am surprised by how different my life is from one month ago. I used to search the streets all day and night for food, water and human affection. I do not know what happened to my owner.  And because I was never spayed, I had a litter of puppies before I was a year old.  It was a scary and hard life. Then one day a nice gentleman that works at K-mart in Mayaguez picked me up on his way to work.  I was covered with fleas and smelled worse than the Mayaguez dump. I was surprised that he helped me. I was really in rough shape. He brought me to Kmart where Mabel and some of the other employees tried to care for me. They brought me food, water and many smiles. I was really hoping I could stay at Kmart. The dog food selection at Kmart was fantastic. They also had a great selection of dog toys. I was in Heaven. I never really got to be a puppy. I really wanted to play.

It was truly my lucky day!  I was paraded around the store like a queen. It was a glorious day.

Then I met my new family. I did not know this yet. A mother and daughter were shopping in Kmart. When they walked out of the store the daughter reached over to pet me. They spoke to Mabel for several minutes in English. I really didn’t know what they were saying. It was all in English….

Mabel told them about her co-worker who picked me up on his way to work. She also said something about trying to find someone to care for me. By then the whole family came in to see me.  The first thing they said was “Let’s take her home!!!”

They were so excited! I think they were more excited than me? Then their mom said “You know you’re dad probably will never talk to us again! But let’s do it anyway!”

They took me to a veterinarian. That was not fun. He poked me then took some of my blood. Then they gave me my first bath, YUCK! They actually had to give me another bath after that first one. I was covered with fleas. I actually enjoyed the baths. Then they gave me medicine and took me home.

I was excited and nervous. I had never had a home before. What is this going to be like? Are they crazy? They could be crazy?

When we arrived at my new home I saw the biggest, most handsome dog I have ever seen! His name is Duke. Duke is a strong handsome dog. It was love at first sight. He was my gentle giant. He is very kind and lets me climb all over him.

But I still hadn’t met their father, the Alpha dog.

The girls in my new family started putting a beautiful red silk bow around my neck. I really didn’t know what was going on. Everything they said was in English. It was frustrating at first. Then they put me in a decorated box. I was really freaking out. They are crazy!!!

Then I heard, “HAPPY BIRTHDAY DADDY!!!” and a new person I had never met opened the box.  Everyone in the room became super quiet including me. I knew he was the decision maker. I was not sure what to do. So, I looked up at him and batted my eyelashes. He looked at me and said, “Wow, where did she come from?” I continued to blink my eyes and then he reached down to pet me. I licked his hand then his face. I knew he would help me. I knew he would like me. I knew it! After only a few minutes I was rolling around and playing on the floor with my new family.

He now calls me his little Puerto Rican princess! I was so excited that he liked me. I sleep by his side every night. I think he loves me as much as I love him.

Like I said earlier, my life is so completely different from a month ago. Now instead of looking for shelter on the streets I get to sleep in a large bed. I wake up every morning and greet everyone in my new family. I have two good meals per day and spend the entire day with Duke, the love of my life.